His Holiness Navayogendra Swamiji Maharaj is one of the foremost disciples of A.C. Bhaktivedanta Prabhupada. He was born on 12th May 1946 on the very auspicious day of Rukmani Dwadashi in the holy town of Udhampur (J&K).

He hails from a royal family of Raj Purohits (family Brahmin priests of the king of Kashmir). His father Pandit Harichandra Ji and Smt. Durga Devi both were ardent devotees of the Lord Krishna. Maharaj Ji is a naishtik brahmachari (celibate since birth).

It is a common saying 'A Morning shows the day'. Since his childhood his holiness exhibited divine qualities of a saint and observed four regulative principles naturally. At the tender age of 9 years his holiness after seeing a movie -Dhruva Maharaja left his home and proceeded towards the jungles just to get darshan of the Lord Krishna in person. But after spending a day in a temple, on the advice of some sadhus he came back to his home. Again at the age of 17, he left his home and stayed for some time in the holy dham of Vrindavan in the association of many sadhus. Maharaj Ji had to come back to Udhampur because his parents had located him in Sri Vrindavan Dham. His desire for Krishna Bhakti grew day by day along with his disinterest in the material life.

After completing his graduation he could not keep himself any longer in a material association and he left Udhampur. He came to Delhi where one day in a marketplace he was quite impressed to see some foreign devotees distributing Krishna books. He followed them and reached the Hare Krishna temple at Palam. Next day by the divine arrangement of Krishna he left for Vrindavan and finally reached in the divine association of his divine grace Srila Prabhupada. It was in the year 1974 when his holiness got initiation from his Divine grace A.C. Bhaktivedana Swami Prabhupada, the founder Acharya of Great Iskcon and formally became his disciple. Seeing the dedication, sincerity, renunciation and pure devotion in him, Srila Prabhupada awarded him the renounced (Sannyas diksha) at the young age of 28.

After taking Sanyas H.H.Nava Yogendra Swamiji traveled around the world over a dozen times for preaching purposes. For seven years he lived a hectic and austere life even refraining from sugar, salt and grains in his food. He twice got the wonderful opportunity to serve Srila Prabhupada as a personal servant. Carrying out the order of Srila Prabhupada with extreme vigour Maharaj is still preaching strongly all over the world till date. Maharaj Ji is expert in explaining Vedic Philosophy to the masses in Hindi, English, Urdu, Dogri, Punjabi, Gujrati and African languages too.

He preaches the teachings of Lord Chaitanya through simple discourses and melodies bhajnas in the same way as the great vaishnavas like Srila Bhakti Vinod Thakur, Srila Narrotama Das Thakur, Srila Lochana das Thakur did, which is easily understood and followed by common masses. His spiritual discourses and vibrant sankirtan enlivens the crowd to such as extent that they just can't stop themselves from dancing and singing.

Maharaj Ji never believes in narrow communism. Besides Srimad Bhagvad Gita and Srimad Bhagvatam he also gives references from the Guru Granth Saheb, Holy Bible, Holy Koran etc. in his spiritual discourses. Maharaj ji believes in strong discipline. He gives utmost importance to cleanliness, purity, truthfulness and punctuality. This is evident from his extraordinary personal activities. He takes his meals only once in 24 hours. His day starts at 2 A.M and he goes on preaching till mid night. He is very loving and affectionate with people and helps them solve their problems.

He has lectured at several universities in India and abroad. He has never been seen wearing any warm clothes and shoes apart from the usual three clothes and wooden slippers of a sannyasi even in chilly winter. He is very particular about the spiritual progress of each and every soul especially his disciples and personally see to it the they are following strictly the four regulative principles (no tea-coffee-intoxication, no meat-onion-garlic eating, no illict-sex, no gambling, no mental speculation) and strongly advocates for getting early in mangal arti. For the sake of preaching, Maharaj Ji is always on the move travelling most of the time. He has been visiting and preaching Krishna consciousness several times in most of the countries across the globe.

He has preached about Srimad Bhagvad Gita to many leaders and presidents of various countries. He developed/established/constructed temples and preaching centers, Gurukuls, goshalas, widow & orphan homes at Africa, England, America, Chandigarh, Vrindavana, Haridwar, Udhampur, Katra, Lucknow, Amritsar, Maharahstra etc. He is also organizing Rathyatras and inspiring thousands and thousands of people across the globe to surrender to the lotus feet of Srila Prabhupada and get the mercy of Lord Caitanya.

ALL GLORIES TO HIS HOLINESS NAVAYOGENDRA SWAMI JI MAHARAJ 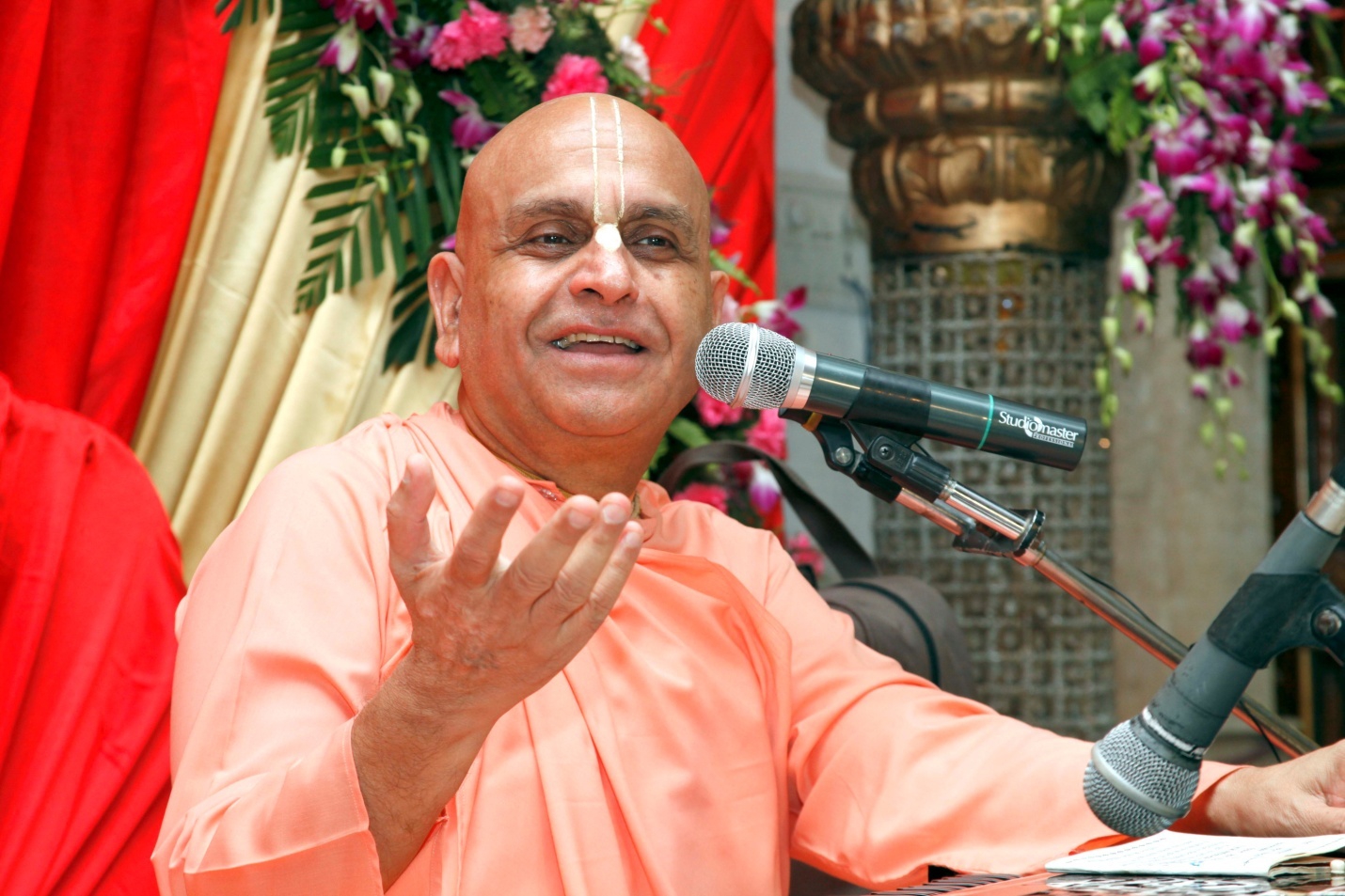 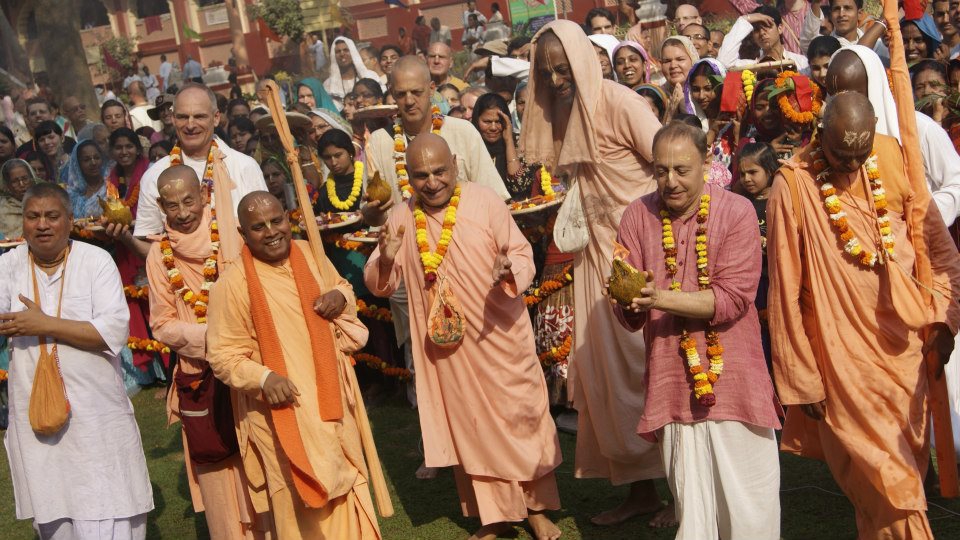 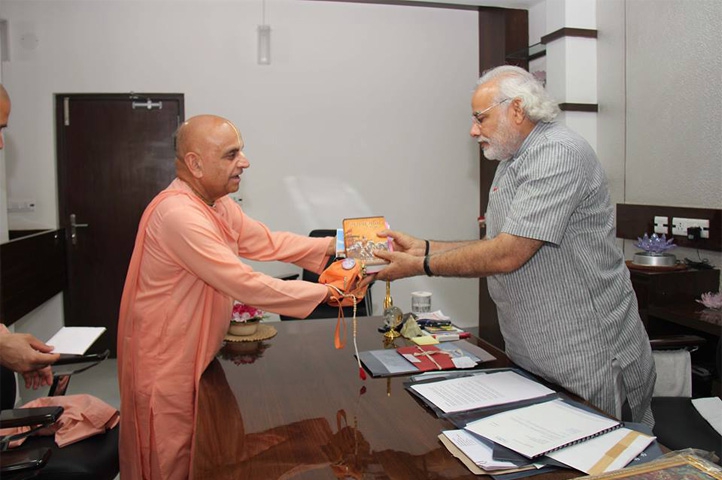